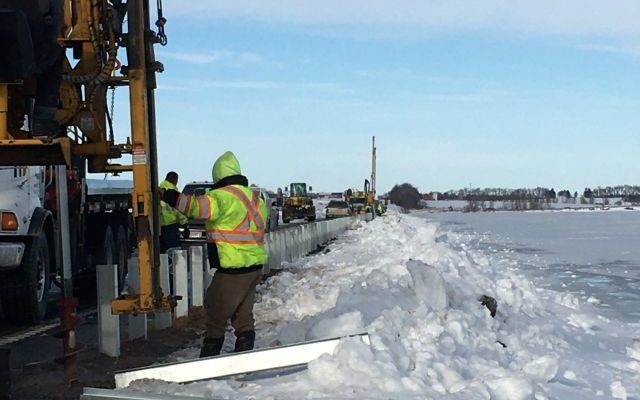 The last step was installing the new guardrail (DOT photo)

The South Dakota Department of Transportation says Highway 81 has reopened to traffic after being closed for several months due to significant flooding in the eastern part of the state. The stretch that was closed is four miles south of Arlington through Twin Lakes.

Governor Kristi Noem says, “Highway 81 is a major roadway in the eastern part of our state, so this closure has had a personal impact on both our people and our economy.  This grade raise has restored access to help folks in this area get back to a normal routine. We will continue partnering with communities as we recover from the 2019 storms and mitigate future flood damage.”

Work began Aug. 19 and included raising the grade 3.5-feet, placing riprap, fabric, geogrid, striping, rumble strips, signing and guardrail. The guardrail installation was a needed safety measure due to the excessive drop off from raising the road and deep waters of 25-feet in some locations along this section.

Motorists are advised to drive through the area with caution, especially during inclement weather. Continued high water levels alongside the road will create a higher incidence of ice on this section during the winter months. The speed limit through this raised section will be set at 55 mph.

The department will continue to monitor water levels and plan to place additional dirt embankment on the in-slopes, extended drainage culverts and connect local roads soon, depending on water levels and additional precipitation in the coming months. Long-term plans are being developed to make the grade raise work permanent in the next year or so.