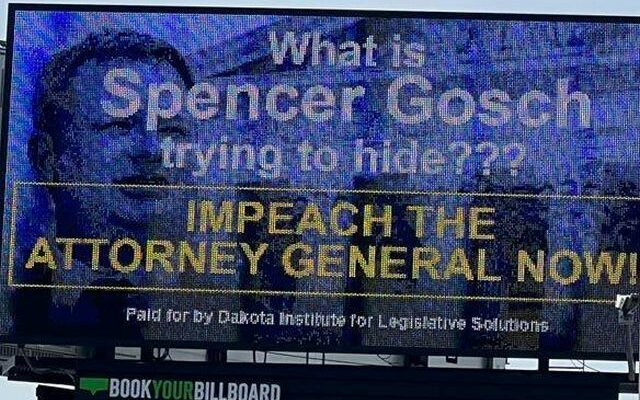 Billboards targeting South Dakota House members examining whether Attorney General Jason Ravnsborg should be impeached have been popping up around Sioux Falls.

The signs demand the attorney general be impeached and name four members of the House Select Committee on Investigation. A fifth lawmaker who voted against the investigation into Ravnsborg was also named in the ads.

The Dakota Institute for Legislative Solutions is behind the billboards, listing itself as a non-profit organized to carry forward Gov. Kristi Noem’s agenda. Noem’s representatives say she had nothing to do with the billboards.

But publicly and privately, state lawmakers have questioned the sincerity of that claim. One of those targeted, House Speaker Spencer Gosch, filed a complaint over the billboards with the Secretary of State’s office Tuesday. A complaint was also submitted to the Minnehaha State’s Attorney office.

Gosch and other lawmakers on the impeachment committee believe that the billboard violates South Dakota law, which states that political advertisements must include a disclaimer. If the communication does not include a candidate, then the organization must list it’s 5 largest donors over the course of the last year. The billboard advertisements do neither.