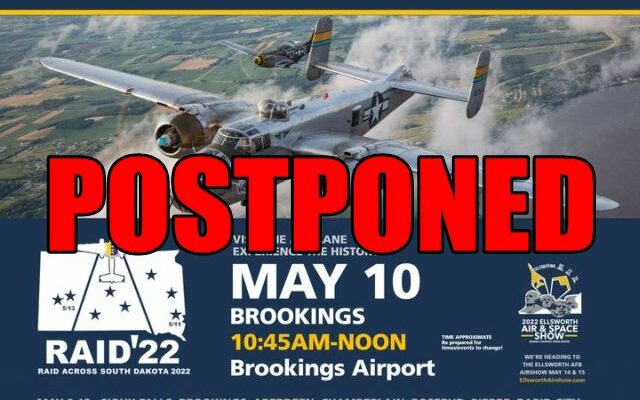 Planners of the Raid Across South Dakota B-25 cross country, multi-community flight event announced the event has been postponed until further notice.
The event, slated from May 9-12, is postponed due to a crucial mechanical issue with the aircraft’s engine and an emphasis on safety.
Event producer John Mollison says the safety of the crew and integrity of the aircraft override all decisions. Based on the facts at-hand, he says they cannot proceed as planned.
The B-25 is owned and operated by the Minnesota Wing of the Commemorative Air Force
The plane had been scheduled to be at the Brookings Airport Tuesday, May 10.
Other stops were planned for Sioux Falls, Aberdeen, Chamberlain, Rosebud, Pierre and Rapid City. Organizers plan to reschedule at a later date.
The plane was going to make the stops as part of its participation in the Ellsworth Air Force Base Airshow on the 14th and 15th.  The Ellsworth airshow remains as scheduled and the public is advised that a B-25 Mitchell bomber to represent the Doolittle Raid will be present at the event.
May 9, 2022