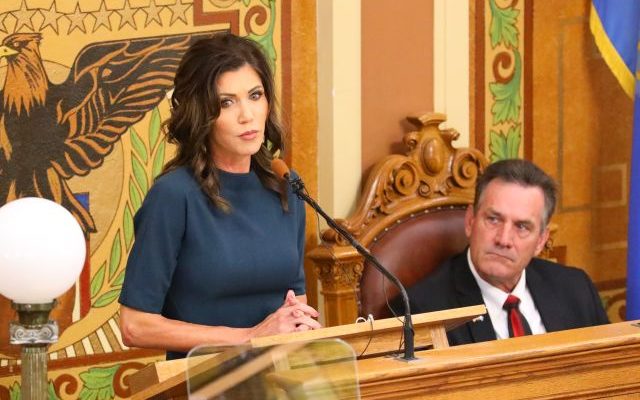 SIOUX FALLS, S.D. (AP) — South Dakota Gov. Kristi Noem on Tuesday will try to win over the Republican-controlled Legislature with details of her plan to enact a historic repeal of the state’s sales tax on groceries. But to deliver on the campaign promise, the Republican governor must convince lawmakers the state can also afford to tackle inflation and a long list of items pressing on the state’s budget.

Noem, a Republican, was critical of a proposal to repeal the state grocery tax during the final days of the legislative session in March, but this fall, she changed course and made it a centerpiece of her reelection campaign. It would help alleviate the squeeze of inflation on household budgets, she has argued.

Inflation, however, also has lawmakers focused on other budget items. Some Republicans and Democrats say they first want to shore up funding for people who draw their income from state funds — teachers, state employees and health care workers funded through government programs. Lawmakers will also look to pay for a list of upcoming expenses: Medicaid expansion that was approved by voters this year, a $600 million upgrade to the state’s prison system, and plans to address labor shortages in elder care facilities.

Some Republicans are also pushing a plan to reduce property taxes on people’s homes by replacing revenue from property taxes that would go to schools with state funds.

“We’re going into a year where there’s a real interest in cutting taxes but there are also a lot of new demands because of high inflation,” said Tony Venhuizen, the former chief of staff to the governor who will next year take a vice-chair position on the House Appropriations Committee.

Noem hosted a dinner Monday evening for lawmakers on the committee that irons out the state budget, offering them a preview of her budget plan.

The governor has estimated that repealing the state tax on groceries would cost about $100 million and argued that state revenue growth can cover it. Revenue growth this year has been $76 million more than the Legislature’s adopted projections, and the state ended the last fiscal year in July with a $115 million surplus.

Budget-setting during most of Noem’s first term was filled with state revenues swollen by consumer spending and federal pandemic relief. Noem has credited her hands-off approach to governmental COVID-19 protection measures for keeping the state’s economy humming.

But lawmakers are also cautioning that those years of plenty — when millions of dollars went to upgrading university campuses — could soon be over.