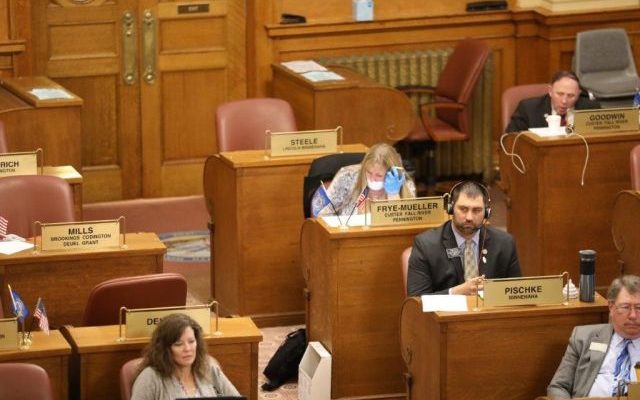 PIERRE, S.D. -South Dakota lawmakers have passed a series of emergency measures as the state braces for the global coronavirus pandemic.

It was a historic day in the Capitol as legislators convened and voted on bills remotely through conference calls in order to follow social distancing guidelines. Both chambers voted to suspend the rules to allow the introduction of new bills. A few lawmakers participated in the House and Senate chambers.

Many conservative lawmakers remained wary of granting broad powers to the government during the crisis and legislators refused Republican Gov. Kristi Noem’s request that her secretary of health be granted the power to order businesses closed during a health emergency. Another measure that failed would have given counties the same powers to close and restrict businesses that municipalities wield.

Legislators met Monday and into early Tuesday morning to decide on the temporary emergency bills.

Among the bills that passed were measures to allow schools to teach students online and waive required instructional hours and to waive standardized tests.

One of the bills postpones all elections in the state currently scheduled from April 14 to May 26 (including the Brookings Municipal and School Board election). Elections would be rescheduled to a Tuesday in June, and could be set on June 2 to coincide with the state’s primary.

Another measure would expand unemployment insurance to people who lost work or jobs because of the pandemic, and another would allow the governor to waive expirations for driver and commercial driver licenses until July 1, 2021.

The bills now go to the governor for her consideration.