A majority of South Dakotans believe the state’s abortion ban is too restrictive and that voters should determine the legality of abortion access rather than the state Legislature, according to a statewide poll sponsored by South Dakota News Watch.

The poll of 500 registered voters showed that a majority (57%) of respondents support allowing legal access to abortion medications in the state, including 42% who “strongly support” such access. Nearly two-thirds (65%) said they support having a statewide referendum to determine South Dakota’s laws regarding reproductive rights.

More than three-fourths (76%) of those polled support allowing legal abortion in cases of rape and incest, an exception not currently allowed under South Dakota’s laws, among the most restrictive in the nation following the Supreme Court’s decision to overturn Roe vs. Wade in June. 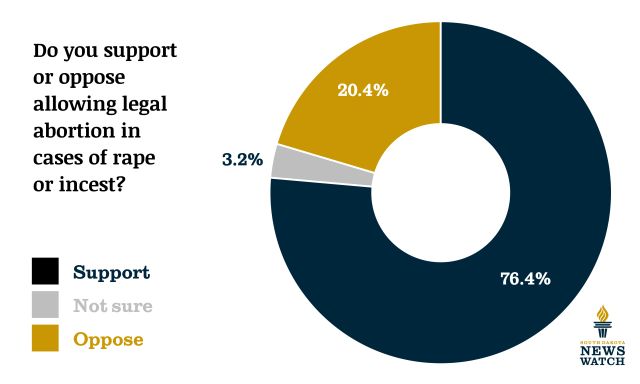 The random survey was conducted July 19-22, 2022, by Mason-Dixon Polling & Strategy and contacted voters in all South Dakota counties by landline and cell phone; it was co-sponsored by News Watch and the Chiesman Center for Democracy at the University of South Dakota. The margin of error is plus or minus 4.5%.

The recent landmark U.S. Supreme Court ruling in Dobbs vs. Jackson’s Women’s Health Organization removed the federal constitutional right to an abortion, leaving it up to states to determine legality and access. South Dakota had a “trigger law” from 2005 that took effect, making it a Class 6 felony for anyone “who administers to any pregnant female or prescribes or procures for any pregnant female” a means for an abortion, except to save the life of the mother. The crime is punishable by two years in prison, a $4,000 fine, or both.

The poll also showed that nearly 8 in 10 respondents (79%) oppose criminal penalties for anyone who helps a South Dakota resident obtain an abortion where it is legal, such as in a neighboring state. An overwhelming majority (71%) also support permitting South Dakota residents to leave the state to obtain abortions.

Gov. Kristi Noem had no comment on the poll results when contacted through her office by News Watch.

The poll revealed no significant differences in responses based on age, gender or region of the state. Though there were partisan differences, a majority of Democrats, Republicans and Independents support holding a statewide abortion referendum; support legalized abortion in the cases of rape and incest; and support allowing residents to leave the state to legally seek abortions in other states.

The majority of respondents in all parties also oppose criminal penalties for those who help individuals obtain an abortion in a state where it is legal.

A constitutional amendment proposed by Dakotans for Health would prevent the state from regulating abortions during the first trimester. During the second trimester, the state could regulate “the abortion decision and its effectuation only in ways that are reasonably related to the physical health of the pregnant woman.” After the end of the second trimester, abortion could be regulated or prohibited except to preserve “the life or health” of the mother.

Dakotans for Health, which can legally start collecting petition signatures on Nov. 5, plans to use both volunteers and paid circulators to get the measure on the ballot for 2024.

It wouldn’t be the first time South Dakotans have gone to the ballot box to determine state abortion laws. In 2006, the Legislature passed a law to ban all abortions except to save the life of a pregnant woman. The measure was signed by then-Gov. Mike Rounds, but opponents gathered enough signatures to refer it to the ballot, where it was defeated with more than 55% percent of the vote.

Two years later, voters rejected by a margin of 55% to 45% a ballot initiative that would have banned all abortions in the state except in cases of rape or incest or “to preserve the health or life of the woman.”

In Kansas, a state that former President Donald Trump won with 56% of the vote in 2020, voters on Aug. 2 overwhelmingly rejected a constitutional amendment that would have allowed the Republican-controlled legislature to tighten restrictions or ban abortion outright, with 59% voting against the amendment. Turnout was unusually high for a primary election, with nearly half of registered voters casting a ballot.